This is the fourth of five or so short notes stating background assumptions that I would like to make explicit before recommending that people read Rationality: AI to Zombies.

People tend to conflate the mind with the brain.

People often think of the brain as that which-implements-a-person; that-which-thinks. But in fact, the brain both implements the personality and builds a model of the world. The brain is not just the thinking-organ, it is also the builds-what-seems-like-reality organ.

All these depictions neglect the fact that the brain is also building the model of reality.

Remember what type of artifact a brain is. It is, among other things, a Rube Goldberg machine that hits reality and reacts, so that its insides reflect its outsides. One of the primary things your brain is doing is building a model of a world.

All too often, people conflate "brain" with "mind."

Now, one must be careful when distinguishing brain from mind. It's not as if your brain implements both a world-model and a tiny homunculus viewer: that would lead to infinite regress. 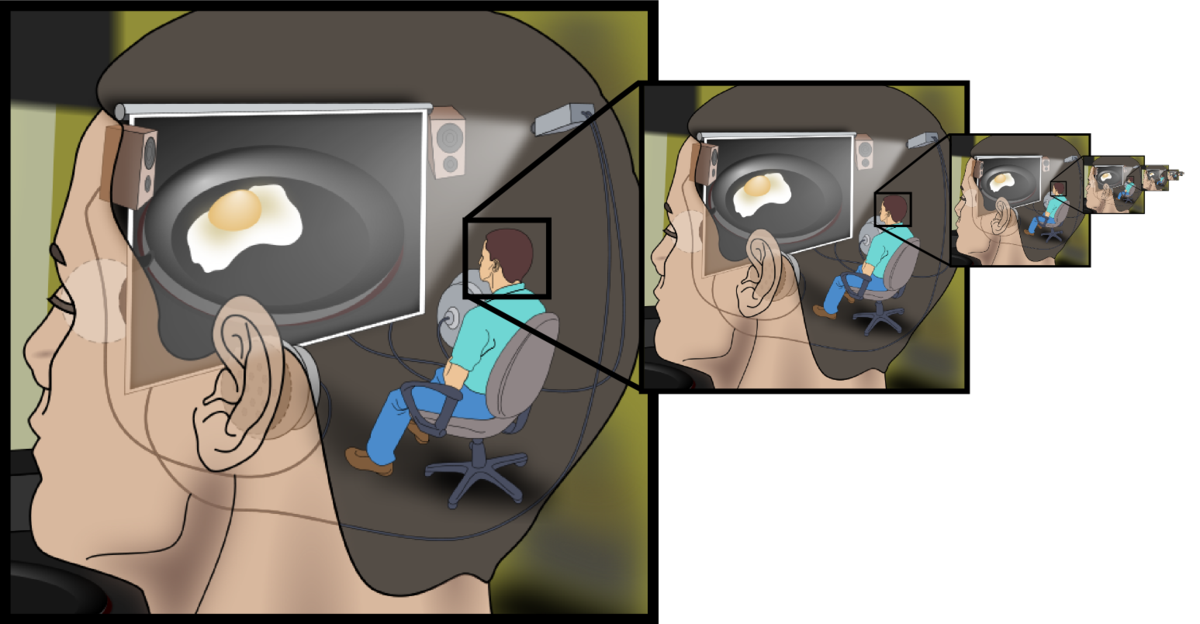 Rather, I'm trying to highlight that the part people self-identify with, the thought-part, the feeling-part, is only one thing among many that the brain is implementing. The mind is not a tiny homunculus viewer looking at an image painted on the back of your skull, but the mind is also not the brain!

Many people have an intuition that the mind is more than the brain. Sociologists will remark that your mind is heavily influenced not just by your brain, but also by the culture in which your mind is immersed. Furthermore, many have experienced their mind moving around their body, or even extending beyond their body. Have you ever been using a hammer to bang in a dozen nails, and noticed your awareness shifting to the hammer's head? Have you ever been driving a car and noticed the car start to feel like an extension of your body?

These sorts of observations can be confusing if you forget what sort of artifact the brain is.

The brain is not the mind. The brain is an artifact which is busily slamming itself into reality in order to build a model of it. The mind is implemented by the brain, but that's not the only thing the brain is doing.

Your mind is affected by the culture that it's immersed in, but this happens only through the medium of your brain. There is no mind-stuff floating out of your body and drinking from cultural pool; rather, your brain is busy slamming ears into air waves and constructing a detailed model of what different people say to you, and these models-of-people affect the context in which the mind is implemented — a context that you-the-mind cannot avoid being altered by. Humans tend to self-identify as a mind-things affected by culture, but the brain both implements the mind and models the culture that affects it! The mind is affected by culture, but only insofar as culture is modeled by the brain!

Similarly, there is no mind-stuff that flows down your arm and into the hammer. Rather, your brain slams eyes into light and builds an inner model of the hammer. You-the-mind can feel your awareness between your ears or at the tip of the hammer, but that awareness-point is located in the model of the world, which often feels immutable, but which is represented within your brain.

It's easy to forget that we are part of a massive blind information engine chugging away in attempts to model the outer world, and instead believe that the brain is the us-thing interacting with True Reality.