This is the post that I tried to write last time, but it accidentally turned into a monologue on caring. Oops. The posts that I expect will be short have a tendency to turn into long monologues.

Anyway, what I set out to say last time is that I don't trust my brain's ability to handle large numbers, but also there are large numbers of things that matter.

So, once upon a time, in attempts to address this, I concocted a plan, with the goal of granting my subconscious a greater appreciation for large numbers.

The idea was simple: I decided to collect a hundred items, and then spend a few hours meditating on each one of them individually. The idea was, if I could instill in myself a deeper respect for tiny large numbers like "one hundred", then this would give me a tangible experience to tie it back to. This could serve as a stepping stone for an appreciation of slightly larger tiny large numbers, such as a thousand (although groking larger numbers would require more clever plans, because biases like the peak end rule would dull the experience in retrospect).

As a tabletop gamer in need of a hundred roughly homogeneous trinkets, dice were an obvious choice. 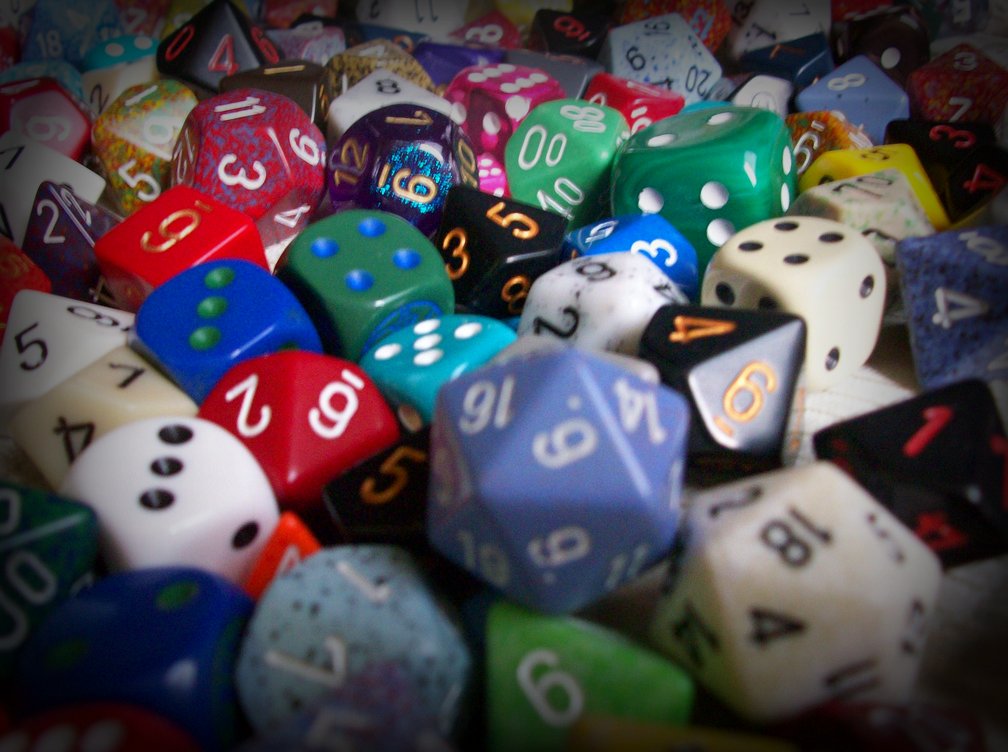 So I picked out a hundred different dice of various sorts, cleared my schedule and my mind, and started meditating on each in turn.

I'd pick up a die, and spend a few minutes focusing on only that die. Remembering all the multitudes of games that I had played with it. Picturing the control that that die had over the stories we told (sometimes great, sometimes small). Picturing the potential it held in future games. And paying attention to the physical aspects: the sheen of the plastic, the quirks in the paint, the beveling of the corners. Considering where it was made, where it was bought, how far it traveled to be here, in my possession. Imagining its future, the span of its life stretching out into the future, winnowing away until finally gone, the plastic in my hands eventually repurposed in innumerable other ways. And contemplating the deeper physics of the die, the precise lattices of molecules built of atoms built of excitations in fields, the way that innumerable photons reflect off of it and into my eyes.

Then I'd put that die down, knowing it better than I had, and pick up the next die. And I'd look at it, too, as something different, clearing away the cached thoughts from the previous die, running through the ritual again. Trying to see the separate potential of this die, to see the separate life of this die, with all its incomprehensible complexity neatly labeled as "just a d12" in the confines of my mind.

And lo: this trick worked. I gained a much deeper appreciation for large numbers. Only, I didn't just gain a newfound appreciation for how extremely freeking huge one hundred is — no, I gained a profound respect for the unimaginable size of seventeen.

Which is about how far I made it.

(Seriously, 17 is huge. Try getting 17 people into a room and then keeping all of them in your mind at once. Or preparing 17 identical sandwiches in a row, separately, and then eating them. 17 is giant.)

In part, this gave me a greater appreciation of small large numbers like a hundred. But mostly, it lowered my bar for what counts as a "large number".

Which worked, in a way — my subconscious now has a much deeper respect for large numbers in that it finds anything greater than a few dozen to be tediously huge. When I encounter big numbers (such as, say, fifty three), it sort of throws up its hands and says "this is like that thing with the dice — way too big for it to be worth my time to comprehend."

This makes it much easier for me to disregard my (broken) intuitions about large numbers, and rely more on doing the multiplication.