I can be pretty dang productive when I put my mind to it.

Many people have a generic mind-model which runs roughly as follows: a person's reported desires are but one voice among the thronging mob of forces that govern the brain, and it takes significant effort and force of will to align the mob for long enough for people to get something done. Many of us have experienced a desire to stop procrastinating, and then have watched helplessly as we continue to surf the internet. Many of us have resolved to do something difficult, only to watch the opportunity flit by us as we stand motionless at the sidelines. 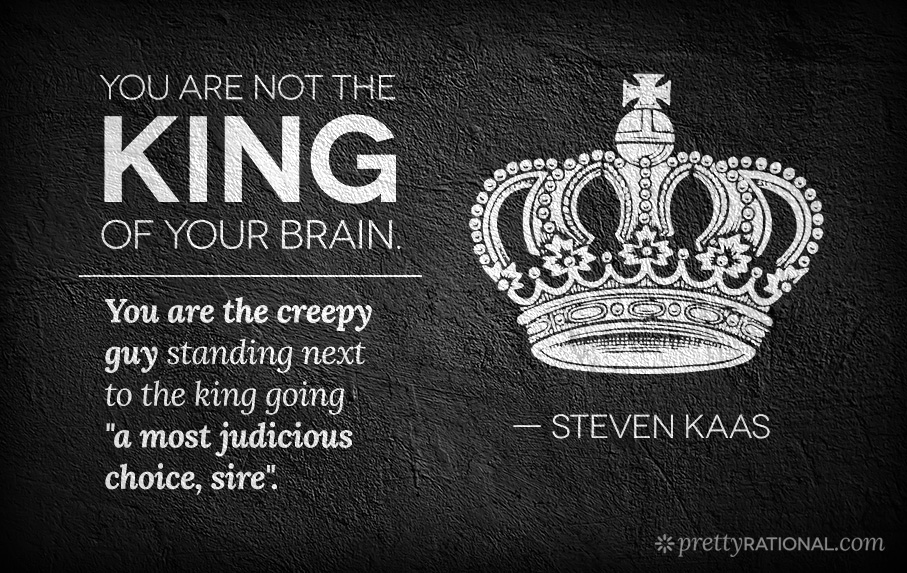 People use something like this model when they speak of akrasia, the tendency to act against your own better judgement. Haidt analogizes the brain to someone riding an elephant, where the conscious mind is a rider struggling to steer. Kahneman writes of a dichotomy between "fast," emotional, immediate processes that govern most of our thinking, and "slow," deliberate, conscious processes that occasionally assume command. I have found that the "spoon theory" model of energy reserves resonates for many people, even those who aren't chronically ill or otherwise disabled.

In all these models, there is a tendency to separate the voice from the mob. Insofar as the voice has the ability to direct the mob (steer the elephant, convince system 1, etc.), we get to do what we want. But when the mob loses interest or focus or motivation, we are at it's leisure.

I find a lot of truth in these models, and so do many others. Thus, many people, upon seeing my high levels of productivity, expect that I must be very very good at keeping tight control over the mental mob, and forcing them to do things that they would rather not do. It's not uncommon for people to remark that I need to be careful about strong-arming the mob (as eventually they rebel, leading to burn-out), or for people to tell me that I must have some sort of iron will (which they cannot replicate).

I don't think this is the case. As I said last time:

A problem isn't solved until it's solved automatically, without need for attention or willpower.

It's possible to force the mob to do something, and this is why willpower is often useful in the short term. But it's seldom a good idea to try to force yourself to do things the mob doesn't want to do in the long term. Ultimately, the mob is the one actually managing your motivation systems, and any plan that relies upon a permanent use of mental force is unlikely to succeed.

It is much better to have the mob on the same side as the voice of reason.

But this is something of a catch 22: many people have mind-mobs that just want to sit around all day and watch TV shows or surf the internet. If your mind-mob just wants to rest and I'm cautioning against force, then how does one ever attain high levels of productivity?

My answer is complex, and relies upon many tools. I've discussed a few of them in the past, and today I'll discuss another.

First, a word of warning: remember the law of equal and opposite advice. For every piece of advice useful to one person, there is some other person who needs exactly the opposite advice.

I am going to discuss a technique that I use for productivity which results in a sense of austerity through compassion/camaraderie: the parts of me that need rest take as much rest as they need, but also try to take as little as they need out of awareness of the scarcity of resources and compassion for the other parts of me.

This has proved a powerful technique for me, but it may be exactly the wrong tool for many others. The goal is not to guilt-trip the parts of you that need extra rest, and the goal is not to give yourself over to self-indulgent whims. I personally find a lot of power somewhere in between, at "compasionate austerity," but many others may react poorly to any internal narrative of scarce resources and mental frugality. Remember the law of equal and opposite advice.

Imagine a student who has been assigned a very important bit of homework with a deadline looming ever closer. Let's say they're trying to kick themselves into high productivity mode. How can they do this? Well, they can pull out the whips and cattle prods and force their mind-mob to be productive (with gritted teeth and building malcontent), or they can use their most desperate voice and plead with themselves, promising rewards for good behavior (that the mob might just take anyway, if it suits them), or they can wait until the deadline is so close that even the short-sighted mob can see it, at which point they'll go into panic mode (which is kinda like high productivity mode, if you squint).

But there's also a fourth option, which is something like "gain the trust of the mob, and build rapport." If the student gets the mob onto their side, then the paper will be done automatically, no willpower or pleading or panic necessary. This obviously sounds nice, but how is it done?

I do this, at least in part, by showing the mob that I am on their side first. This involves self-signalling, as discussed in last week's post. Specifically, it involves signaling to yourself that you are loyal to the mob.

Sometimes, the mob in you will make demands that sound unreasonable, such as "cancel everything today, I need a break." In these situations, it's easy to try to force or plea or bargain with yourself. I take a different tactic: I ask myself if this is really what I need, and if it is, then I do it.

I show the mob that I respect its demands, and that I'm on its side. After all, we have the same goals; and furthermore, I am not the king in my mind. I do not desire a fight (and if I did, I wouldn't win it).

There are some really bad ways to do this (remember the law of equal and opposite advice!), and if you do this incorrectly it may lead to destructive self-indulgence. If your voice of reason signals helplessness in the face of the mob's whims, if it gives itself up to the mob, then you might end up unhappily pursuing short-sighted whims. The trick is to signal respect for the mob instead: what my mind reports it needs, it gets. This—an unflinching willingness to get the mob what it wants—tempers the mob's demands.

The appropriate sentiment can perhaps best be described by this clip from the film It's a Wonderful Life:

This scene portrays a bank run during the beginning of the great depression. It features the protagonist, George Bailey, trying to calm down a worried mob by reminding them that they're all in this crisis together. The mob doesn't really go for it, and he ends up using his honeymoon money to keep the bank alive.

The first member of the mob to get his money out of the bank demands the full value of his account, $242. George pleads for austerity, reminding him that they're all in this together, but Tom still demands all his money. George doesn't protest or argue, he just nods and pays out Tom's entire account (and then extends the man a little extra compassion, to boot). The next two members of the mob say they can get away with $20, and are starting to express some concern for George using his own money for this. Then Mrs. Davis bids lower, asking for only $17.50. Overcome, George gives her a kiss on the cheek.

This is the sort of relationship—between George Bailey and the mob—that I have the "voice of reason" cultivate with the varied and disparate parts of my mind. When some part of me demands that I pay its full account, I'll ask it once how much it needs, but if it still demands its full account I'll pay up without hesitation (and extend some additional compassion). This is done not in an appeasing way, but it a respectful way: we're all in this together.

But the voice of reason, in turn, is willing to pay out of its honeymoon money. It knows that everyone is going to need some resources to make it through, and does not begrudge any part of me for that.

My loyalty is not to any individual appointment or task. My own mental health is among my top priorities.

Once the mob sees this, once the mob knows that I will move the heavens and the earth in order to meet its needs, it doesn't tend to demand the full account. Because, in fact, the mob respects the scarcity of scarce resources, it wants the voice of reason to have enough flexibility to keep on achieving good outcomes. Done right, the mob enters a sort of camaraderie where it takes as little as it can out of compassion, because we all know that life can be hard.

When Mrs. Davis leaves that bank with $17.50, she isn't feeling resentment or smugness. She knows that she's going to have to struggle a bit to live on only $17.50 until the bank re-opens, but she isn't dreading the struggle or muttering curses. No, she goes home filled with compassion, with respect for George Bailey who is taking great pains to get everyone through this crisis together, and with a tighter feeling of community and closeness to those around her enduring similar austerity. She goes home happy and warm.

This is the mindstate in which I attain high productivity: various parts of the mob of my mind occasionally need rest, recuperation, and procrastination. Parts of me ask for these things. When they do, I ask them how much they really need, how much they can get by with. Do I actually need to take four days off? Because I will, but it's expensive.

Often, when a part of me really needs a break, and throws up its hands feeling overwhelmed, its initial demands are unrealistic—"two weeks with no responsibilities!" So then I ask it again, with the demeanor of George Bailey, what it really needs to get by. And that part of me quickly remembers that all of me is in this together, and that I'm trying to do some very difficult things, and that all parts of me are constrained by scarce resources. Then the part that protested searches for what it really needs, the bare minimum, and it usually answers something like "I can get the rest I need in fifteen minutes."

And this sacrifice can leave me feeling stronger, feeling warmth and compassion and self-camaraderie, the same feeling that spurs George Bailey to kiss Mrs. Davis' cheek in the video clip above.

There is only so much time and attention that we have in this world, and we're trying to do many amazing and wonderful things. If you want to be able to do more than you're currently doing, I don't suggest trying to force yourself. Instead, I suggest showing yourself that you really are willing to move the heaven and earth for yourself, in order to satisfy your needs. This, in turn, can help you build up the mental camaraderie (and resulting austerity) that comes from all the parts of you understanding that you're all in this together.